You are here: Home › Uncategorized › “Eye for an Eye”

I learned many things about the ideas and people who influenced Dr. Martin Luther King this past week. Mahatma Gandhi’s influence Mahatma Gandhi’s influence on Martin Luther King Jr. adopting “passive resistance” and “non-violence” as grounding principles for his civil rights must have solidified during his visit to India in 1959. I was surprised to learn that Gandhi’s attitude toward British oppression was inspired by the Russian Christian Anarchist Leo Tolstoy’s writings particularly the book first published in 1894 in Germany but banned in Russia, The Kingdom of God Is Within You Leo Tolstoy’s The Kingdom of God Is Within You

As I delved a little deeper, it made sense that Martin Luther King a Baptist Minister inspired by the non aggressive attitudes Jesus taught during his life on earth would be inspired by Gandhi who lived those very principles of non-violence. Gandhi not only preached non-retaliation he lived it, he put his own life in jeopardy to stop the violence that threatened to destroy the brand new India following British withdrawal. Martin Luther King showed the same kind courage facing racial hatred and violence. Acting on the impulse to take revenge, is our first instinctual response. The “fight” response feels good and righteous. “Eye for an Eye” is deep in our psyche. “We ought to compel ourselves to resist evil”, says Swedenborg in his seminal work, Heaven and Hell “and to do good as of self but at the same time acknowledge that it is from the Lord.” Hitting back, firing the gun and dropping a bomb may be our first response but it never leads to peace; it only fuels more violence. Resisting the impulse to take revenge is the way to peace and reconciliation. Mahatma Gandhi’s defining moment is captured in this clip. He refused to validate the raging impulses of his people burning for revenge. Eye for and Eye
How do we respond to the violence suffered by millions of people across much of the world? Are we able to see our own violent tendencies and resist them the way Jesus taught us? Do we hear his words, “it was said, ‘Eye for eye, and tooth for tooth. But I tell you, do not resist an evil person. If anyone slaps you on the right cheek, turn to them the other cheek also.” Matthew 5:38-40.
Living a non-violent way of life is as much counter culture today as it was in the time of Jesus. But today, great leaders like Mahatma Gandhi, Martin Luther King Jr. and others’ exemplary lives of non-violence can inspire us to live in a way that does no harm to others. The film “Pray the Devil Back to Hell” 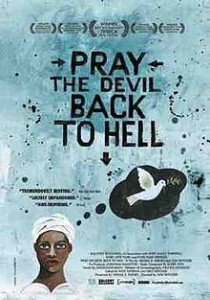 Pray the Devil Back to Hell

documents a peace movement called the Women of Liberia Mass Action for Peace. Organized by a social worker Leymah Gbowee, the movement started with praying and singing in a fish market. Leymah Gbowee organized the Christian and Muslim women of Monrovia, Liberia to pray for peace and to organize nonviolent protests.